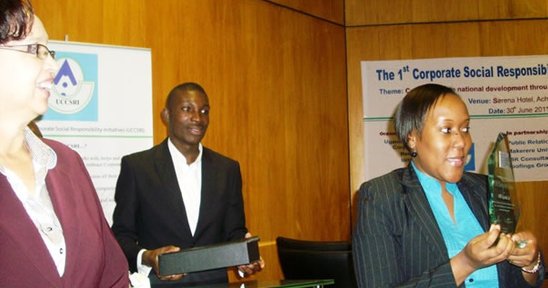 Inaugurated on 30th June 2011 at Kampala Serena Hotel, during the 1st CSR Round-Table®, The “CSR Exemplary Award” is a meritorious, prestigious and outstanding award given by UCCSRI. It is not a substitute to any award given in Uganda. Its uniqueness is that, it’s given to those (persons, companies, parastatals, development agencies, etc) who have laid a track of good example of Corporate Social Responsibility (CSR) and sustainable development practices for others to learn and emulate. It’s not a ranked award neither an annual award.

You don’t have to be nominated neither have to compete for this award. It’s only given out after longitudinal research and systematic observations conducted by UCCSRI and its partners to very few qualifying recipients during the ‘CSR Round-Table® events.’

This award also does not base on how much money has been invested by its recipient in CSR but rather a combination of: (i) the uniqueness in what they do; (ii) the duration and quality attached to what they have done over a given period of time (minimum three

The CSR Exemplary Award is offered in honor and recognition of long term “corporate social responsibility and sustainable development initiatives” aimed at improving the living conditions of the people in communities local to and impacted by the ‘award’ winning organization / business entity / person. That is, it’s given out:

i. In honor of an initiative to address a specific need identified in Uganda and addressing it by the “award winner” has brought about recognizable social and human development / transformation.

ii. In honor of a program or practice demonstrating the long standing commitment to corporate social responsibility (CSR) of companies and organizations in Uganda.

iii. In honor of ‘a creative initiative’ in which a large development impact is made irrespective of the amount of the financial investment made in Uganda.

iv. In honor of a long term social and human development project, intended to be continuously supported by a specific or group of companies (or in-partnerships), once the project is completed.

UCCSRI was pleased to announce the 2nd Edition of the “Corporate Social Responsibility (CSR) Exemplary Award.” It was presented to the winners during the “2nd CSR Round-Table ®” at Kampala Serena Hotel, on Thursday, 10th November 2011.

The ‘CSR Exemplary Award’ is an award that is given out during the “CSR Round Table events,” organized by UCCSRI, to people, organizations and companies that have demonstrated continued uniqueness and can be benchmarked on by others in the struggle to engage in and shape CSR and sustainable development in Uganda.

Therefore the purpose of this communication is to announce to you the 2nd Edition of the CSR Exemplary Award,and also to thank you and your organization for being Social responsible.

The 2nd Edition of the CSR Exemplary Award.